Ventricular fibrillation is a arrhythmic disorder of the heart characterized by rapid ineffective irregular heterogeneous twitching heart beats. It is one of the most common arrhythmias in patients with sudden cardiac arrest.

Ventricular fibrillation has classically been been described as “chaotic asynchronous fractionated activity of the heart” (Moe et al. 1964). It has been more elegantly been defined as a “turbulent, disorganised electrical activity of the heart in such a way that the recordd electrocardiographicic deflections continuously change in shape, magnitude and direction” (Robles de Medina 1978).

There are two types of ventricular fibrillation;

primary usually an acute disorder related to a acute ischemic event of the myocardium.

There are a variety of diseases that cause ventricular fibrillation but it is mostly caused by ischemic heart disease. If the rhythm is not corrected within a few seconds the resulting clinical presentaion is loss of pulse and blood pressure, altered mentation, often complicated by respiratory arrest, asystole and death if untreated.

Diagnosis is suspected clinically by in a patient who suddenly arrests, with changing mentation, loss of pulse and blood pressure and who may also have respiratory arrest. The event may be preceded by and ischemic cardiac event like chest pain.

The only effective treatment is electrical defibrillation. The probability of successful defibrillation deteriorates as time passes and should be performed within minutes 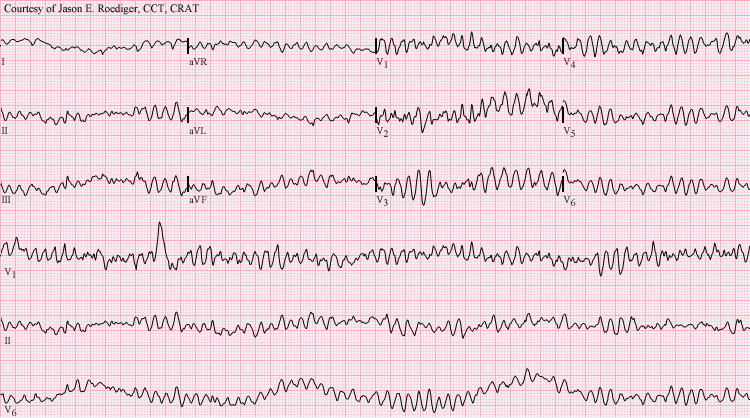 As seen in Lead V2